Allan H. Meltzer (1928-2017) earned a great reputation as an outstanding academic. He was a scholar of Nobel Prize quality. He taught at some of the best universities in the world, including Chicago and Harvard. But he did most of his teaching at Carnegie Mellon University where he became their longest standing professor. There he led a course focusing on the explanation and defense of the workings of the free-economy: capitalism. Recognizing his contribution, the university decided to name his chair after him, even during his lifetime: The Allan H. Meltzer University Professor of Political Economy. A chair that will be hard to fill.

Meltzer was less known as an intellectual entrepreneur where he deserves equal praise than as an academic. With another remarkable scholar, his former teacher and colleague, the Swiss economist Karl Brunner (1916-1989), he created conference programs which attracted the best in the field. In 1970, they co-founded the Carnegie-Rochester Conference Series on Public Policy. Then, in 1973, they founded the Interlaken Seminar on Analysis and Ideology. In a lengthy interview published a couple of decades ago, Meltzer explained that Karl Brunner, “got very concerned when he first went to Germany and later Switzerland, but even more in Germany, about the growing Marxist, or Neomarxist influence in the universities.” To counter this, Brunner and Meltzer created a seminar which focused on teaching good economics through dialogue and discussions over academic papers. 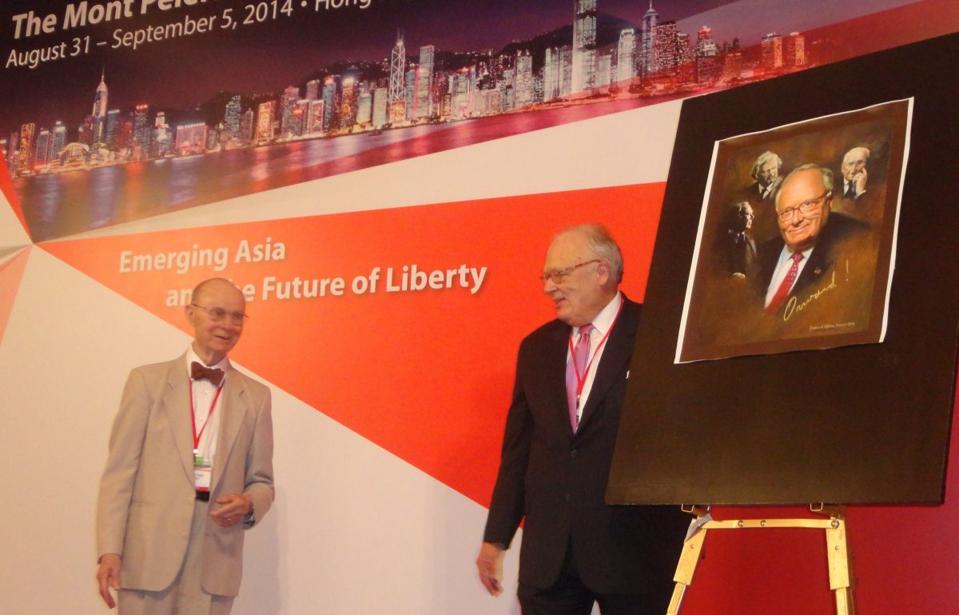 Dr. Allan H. Meltzer shared a seat on the board of the Sarah Scaife Foundation for thirty years with Dr, Edwin J. Feulner, portrayed here at the Mont Pelerin Society Meeting in Hong Kong, 2014)

The essential characteristic of an intellectual entrepreneur is to see a need or discover a new way of satisfying a need, and then attract resources and invest them for that goal. Meltzer had become frustrated by the superficial way in which specialized media analyzed Nixon’s price and wage controls. He decided to get Brunner’s support to put out “a statement and say that it was a bad idea and why.” Before fax machines and internet, preparing that statement was a difficult effort. To get signatures they had to call a lot of people which turned out to be very time consuming. Meltzer believed that “well trained economists should comment on public policy issues” so with Brunner he created these seminars and conferences and invited scholars and experts with different backgrounds and ideologies. Meltzer stated that they “brought in some sociologists and philosophers, even some Marxists. I remember vividly we had some well-known Marxist … who gave a paper. At the end of the paper we had a discussion period. One of the questions was: what would falsify your paper, your model, the Marxist model? What would you regard as compelling evidence to make you think that this model was wrong? All he could say was that he thought that was a hostile question.”

The goal of these efforts was to show that many of the problems which are blamed on the market were mainly due to restrictions and ill-conceived regulations placed on the market which was not allowed to operate. Dr. Jerry Jordan, former president of the Cleveland Fed, attended 17 of the Interlaken Seminar programs. He admired Dr. Meltzer and the depth of the papers and the diversity in the background of the participants. The environment created by Meltzer helped expand the knowledge of all.  The Shadow Open Market Committee, another Meltzer-Brunner creation, had a more focused purpose. Ongoing since 1973, the committee gathers economists, bankers, and academics who analyze the actions of the Open Market Committee of the Federal Reserve.

As trustee of the Sarah Scaife Foundation, Allan H. Meltzer also helped support the work of many think tanks. Edwin J. Feulner, president of the Heritage Foundation, tells me “Prof. Allan Meltzer and I joined the Board of Trustees of Scaife at the same meeting, almost thirty years ago. Since then, I came to know and respect Allan’s deep understanding of economics, public policy, and the institutions of civil society. I learned from him as a teacher, and as the leader of the International Financial Institution Advisory Commission, where I was a member.” That commission also included other outstanding economists, such as its chief of staff, Gerald P. O’Driscoll, who held relevant positions at the Federal Reserve Bank of Dallas, Citigroup, Heritage and Cato, where he remains as a senior scholar. 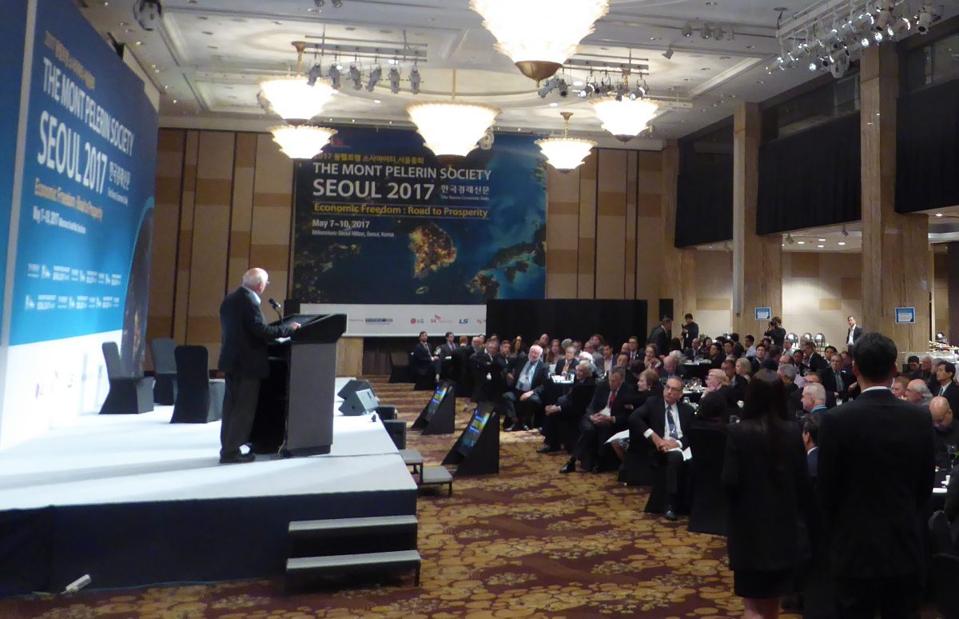 Allan worked until the end. After a stellar pass through the American Enterprise Institute, where he was the first Irving Kristol Award winner (2003), he moved to the Hoover Institution, at Stanford University. Meltzer was leading a team analyzing and documenting the cost of the regulatory state and its impact on the rule of law. Jesús Fernández Villaverde, from the University of Pennsylvania and collaborating in this effort at Hoover, writes about Meltzer:  «He will remain as one of the towering figures of monetary economics in the second half of the 20th century. His three-volume History of the Federal Reserve is unlikely to be surpassed in a generation as the definitive history of our central bank. The wisdom and common sense present throughout the book, the attention to detail, and the mastery of primary sources are an example to all economists interested in monetary issues. Besides his scholarly endeavors, Meltzer kept until the very end his commitment to the cause of free markets and to helping new researchers. His most recent project on the origins of the rule of law and its importance in the process of economic growth is a book that, unfortunately, we may never be able to read.»

He was president of the Mont Pelerin Society (MPS), for the 2013-2014 period and chair of the program committee of the last general meeting in 2016. At the tribute to Dr. Meltzer at the 2017 regional meeting, Jerry Jordan said that “those of us who knew him, and know of his work, no doubt think of him as I do, as one of the most prolific economists of the past 60 plus years.” He required rigorous and serious work, but respected a wide variety of philosophical approaches. By his style of life, from family to clothes, music and friends, one would think he was a conservative, but he saw himself as “a libertarian, not as a conservative. Conservatives look to the past and want to restore it. They have a rigid dogma as well. It just happens to be a different rigid dogma from socialists. I’m a libertarian, that is, an old style liberal.”

Listing all his awards and honors would fill several pages. For his contributions in the policy arena I should note that in addition of the Kristol award, he also won the Bradley Prize in 2011. We can conclude with Jerry Jordan that “few people on the planet had such a rich and rewarding life.” Even fewer have helped so many to live their own rewarding lives. We will miss him, but we will carry on his work.