Michelin is a French surname, but it is also a synonym for quality tires and restaurant recommendations. This article, however, is not about the current state of this $18 billion company but about some of its most important roots: the principles that guided François Michelin (1926-2015). Major corporations from around the world have seen their brands tarnished but not so Michelin. It consistently ranks among the companies with the best reputations.

I only spent a few days with Mr. Michelin, though I recently re-read a book titled And Why Not?, which carries a lengthy interview describing his views. The processes and compounds used in manufacturing the tires are carefully guarded, but the reasons that Michelin believed led to their success are free for all to follow.

The work of major corporations is greatly influenced by government intervention, be it barriers or support. Michelin was a private-sector man who did not look to government for solutions or directions, and his company was built that way. He knew that the private sector is not perfect, but he saw “the vast number of small errors made by all the actors in the economy as a whole is infinitely less dangerous than the major mistakes committed by a dozen technocrats working in their own little areas of responsibility.”

Government bureaucrats can use the power of government to make people buy things, but not so private companies. Michelin explained: “If somebody does not want to buy our tires, I cannot do anything to make them buy our tires…. It can never be stressed enough that the customer is the real owner of the business. He is the one who decides to buy your products…or those of your competitors because yours are too expensive or not as good.”

Keynesianism, the body of policies that developed from the writings of John Maynard Keynes (1883-1946), is still in full force today. The ideas of this famous economist are cherished and perpetuated by those who champion interventionism. Michelin did not have much liking for what he regarded as Keynes’ major legacy: “Inflation is the granddaddy of all vices. Keynes, who obtained the financing for Hitler’s national socialism from the Bank of England, said it quite well: ‘I am an immoralist because I know that inflation is able to pervert the conscience.’ Inflation is an organized lie. A drug that can have tragic consequences.” I have not found that exact quote in Keynes’s writings, but I lived through the corrupting effects of inflation in Argentina, my native country, where economic policy has been mostly dominated by his followers.

Another little-understood “Michelin lesson” is taxation. Michelin was clear also on this topic: “When people talk about lowering taxes, they say that it is going to cost the government! Where is the taxpayer? What happens to his purchasing power, the foremost element of economic life?” He concluded: “We know that the real engine of growth would be a massive lowering of public spending, which means lower taxes. This is the only way to give customers back their purchasing power and to make it possible and desirable for them to buy, save and take risks.” 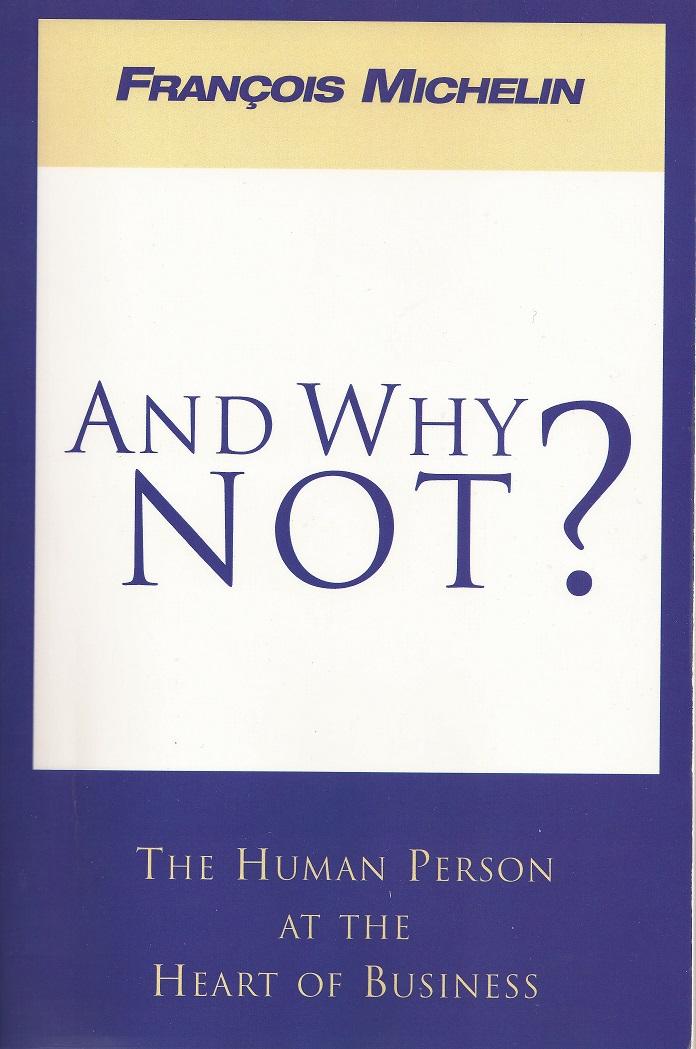 And Why Not? a book based on an interview of François MichelinALEJANDRO CHAFUEN PICTURE OF BOOK COVER

Companies, however, are built with human beings, and Michelin’s lessons are also valuable here. His book is subtitled “The Human Person at the Heart of Business.” He wanted people to find meaning in their work.  “Each time I meet someone,” he said, “I ask myself: What diamond is hidden in this person? All these jewels that surround us make an incredible crown, when we have learned how to open our eyes and see them.” His remarks on this topic reminded me of a short essay by Father Jaime Balmes(1810-1848), “Relations between Manufacturers and Workers.” Balmes recommended that employers create environments that would benefit the workers and also “make them” good. He stressed that without forgetting the need for profits, the owner, within the limits of justice and equity, should show that he is ready to make sacrifices.

Michelin goes further: “You have to want other people’s freedom, you have to desire to give them the capacity to conduct experiments and to make mistakes sometimes as well.” He recommended humility:  “You become a dictator as soon as you no longer acknowledge the fact that the other person has a part of the truth.” Being challenged inside and outside the business is also healthy: “The absence of competition leads to the phenomenal loss of substance.”

In the end, what counts is self-knowledge and continued learning. “Be who you are, do not try to be your father or your grandfather. Be genuine, with all your strengths and weaknesses, but open your eyes, open them wide. Go into the workshops.”

Michelin was a man of faith. “Beauty is another name for God” was one of his aphorisms. The late Sir John Templeton (1912-2008) wrote that Michelin “is ultimately concerned with higher things” and “sees their meaning made real in the apparently ordinary happenings of everyday life.” There is considerable beauty in the restaurants that Michelin ranks as the best. For those of us who love cars, there is even beauty in good tires.

Ultimately, as no one can give what he does not have, Michelin reflected upon his life as an invitation to other business leaders to ponder: “You think that you are building a family or a company. And, in the final analysis, it is yourself that you are building. In my own personal case, I believe that I am working all the time.”