Operation Finale, a film just released in the United States, is about the capture and kidnapping of Adolf Eichman (1906-1962) in a Buenos Aires suburb. Just a few weeks ago, Jakiw Palij, a National Socialist (Nazi) of much lower ranking, was finally deported from the United States. I do not know the producers of the movie but I imagine that the closeness of these facts is just a coincidence. It was not a coincidence that when I was born, another Nazi, Joseph Mengele (1911-1979), lived only three houses away from the house where I lived. Juan Domingo Perón (1895-1974), the founder of the party that destroyed and still haunts Argentina, gave cover and protection to Eichman, Mengele and many other Nazis. 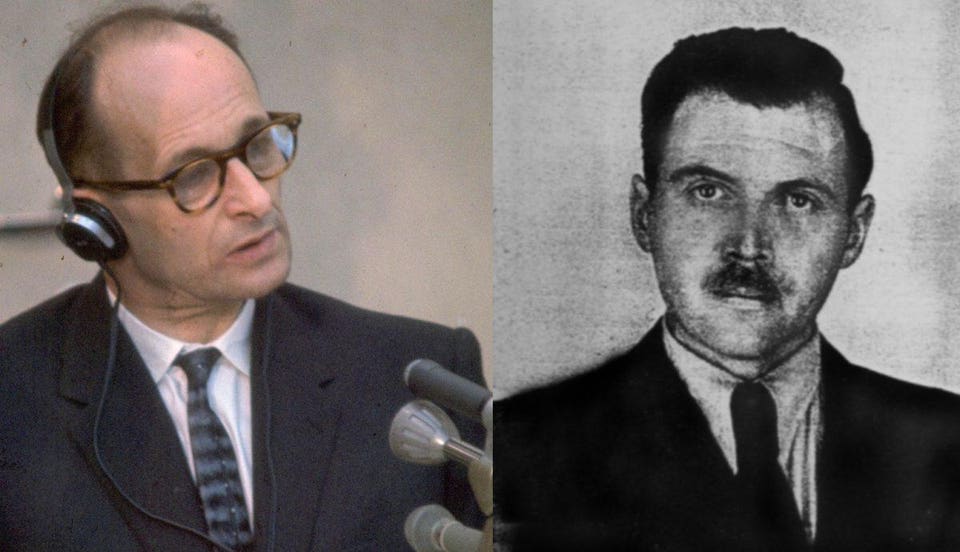 There are numerous historical books, novels and even movies about the members of the National Socialist extermination machine who fled to Argentina and other South American countries.

The Nazi who lived close to my family, Joseph Mengele, has been credited for being extremely astute in evading capture and changing addresses just in time. But many mistakes in official reports, perhaps some made on purpose, allowed him to avoid being properly tracked. From Argentina he moved to Paraguay and then to Brazil. He died after a stroke while swimming at a Brazilian beach not far from São Paulo.

It was only in the late 1970s that I started focusing on Mengele, “the Angel of Death.” Before that, my only reading about the Nazis in Argentina were the few references about the affinity between the National Socialists and Juan Perón that was recounted in Libro Negro de la Segunda Tiranía (Black Book of the Second Tyranny) published by a commission established by the military government who deposed him in 1955 and called for elections in 1958.

I became more interested after an encounter in 1978 while taking a short break from college and visiting friends near Toronto. In jest, the wife of my host accused all Argentines of protecting or harboring Nazis. “Why do you say this, there were some, but they were not all over,” I responded. She led me to a book published a few years before, Aftermath: Martin Bormann and the Fourth Reich, by Ladislao Farago. It was in this big book where for the first time I saw copies of official documents about Mengele, including his address in Argentina. I immediately recognized the neighborhood as well as a glaring mistake. It appeared in the cover of the seven-page, 10-count, Mengele indictment that came from Germany, dated June 5, 1959, but not received by the Argentines until 1960. It stated that Mengele’s address was Virrey Ortíz 970, in Vicente López, a suburb in Buenos Aires. I was born and spent 30 years of my life in Virrey Vértiz 930, in the same neighborhood, but Argentina never had a Virrey (Viceroy) Ortíz, or a street with such a name. As soon as I returned to Argentina from my studies, I was able to corroborate that indeed, Mengele had been our neighbor.

Documents about Nazis in Argentina are hard to certify as genuine. Document on left describes how Nazis were using submarines to smuggle their fortune in Argentina through accounts of Eva Duarte (later Eva Peron). Document on right shows the wrong address for Josef Mengele in a German indictment (Virrey Ortíz 970)PHOTO MONTAGE BY ALEJANDRO CHAFUEN FROM PICTURES APPEARING IN AFTERMATH, BY LADISLAO FARAGO

When the German indictment came, Mengele had already left. His departure, however, was not due to the formal accusations. He was feeling safer in Argentina so, at the time, he even had documents issued under his true name. Among other fake covers, he had been going by the name of Helmut Gregor. After some menial jobs and humble business efforts, Mengele had become a leading provider of abortions in my neighborhood and vicinity. One of his clients died on the operation table, after which Mengele was detained, fingerprinted and subsequently freed. Through his connections he was let go but the encounter was too close for comfort and he decided to leave fast for Asunción, Paraguay. Many years later, when President Carlos Menem was positioning Argentina closer to the United States and the West, in a rare moment of Argentine transparency, he ordered to open and share the Nazi files. It was in the mid 1990s during his second term when he decided to create a commission to disclose National Socialist activities, the Comisión para el Esclarecimiento de las Actividades del Nazismo en la República Argentina (CEANA). After two years of investigations, the commission acknowledged there were 180 confirmed cases of Nazis accused of crimes who went to Argentina.

Unlike what some movies such as Marathon Man and The Boys from Brazil(and a few scenes in Operation Finale) depicted, Nazis like Eichmann and Mengele did not work with a network of powerful Argentines to recover power and establish a Fourth Reich. Their freedom depended on maintaining a low profile. Although few were caught or indicted, there is no doubt about their presence in my native country. Another well documented case was that of Erich Priebke (1913-2013), detained in the mountain city of Bariloche and sentenced to life in prison for the 1944 killings in the Ardeatine caves in Italy

But conspiracy theorists focused on Martin Bormann and Adolph Hitler. Their narrative, that Hitler faked his April 30, 1945 suicide, Bormann did not die in an attack a few days later (May 2) and that both were working to establish a Fourth Reich could make for better book sales.

The evidence presented by some who, like Ladislao Farago, devoted an important part of their life to track Nazis, is stronger in the case of Martin Bormann. Farago wrote a 480-page book with abundant documentation. I still, nevertheless, have doubts that Bormann survived. The documentation that Farago  reproduced in the book was shown to him in the early 1970s. Those documents present a compelling but ultimately unverifiable story.

Farago is not alone: The most famous Nazi hunter, Simon Wiesenthal, also believed that Bormann was probably alive “living near the frontier of Argentina and Chile.” The Argentine intelligence service SIDE, however, claims that any documents Farago alleges were shown him by agents were most likely fabricated. When Eichmann was kidnapped, the SIDE claims that they “let it happen.” They were tracking and not putting blocks on the Mossad operations. Argentina’s president at the time, Arturo Frondizi (1908-1995), a civilian, was trying to get the political support of Nazi sympathizer Juan Perón, then in exile in Spain. Collaboration with the Israelis at that time could have jeopardized Frondizi’s plans.

What are the lessons that I, and others, can learn from this continuing hunt and focus on one of the worst actions committed by humans? I am a strong believer in the truth of philosopher George Santayana: “Those who cannot remember the past are condemned to repeat it.” There is one lesson: forgetting the horrors of the past is dangerous. The most advanced countries are not immune from the worst horrors. The other lesson is how a determined group of victims of totalitarianism can help maintain the fight for justice until the end.

What about the questions raised by the hunt for Nazis? The Israelis were not the only ones tracking the Nazis, and conspiracy theories abound. Before the United States declared war against them, many of the business “nobility” from the United States and other countries profited from doing business with the National Socialists. During the early 1940s, the U.S. government, both through its embassies and the War Department, recruited talented people to track collaboration and communications between Latin American governments and the National Socialists.

The facts that Bormann had access to the fortune of the Nazis, and that Allied countries would have liked to return the loot to rightful owners and a British operation (under the command of none other than Ian Fleming) was tasked with Bormann’s capture fed many theories. The operation’s code name was “James Bond” and a long book, Op JB describing it, appeared more than two decades ago. Fleming ruminated about creating the James Bond character and thrillers at the Estoril Palace Hotel in Portugal. The knowledge and involvement of U.S. and U.K. intelligence services provided abundant ammunition for conspiracy theorists. Additionally, a Soviet interest in helping spread such rumors and innuendo cannot be denied. 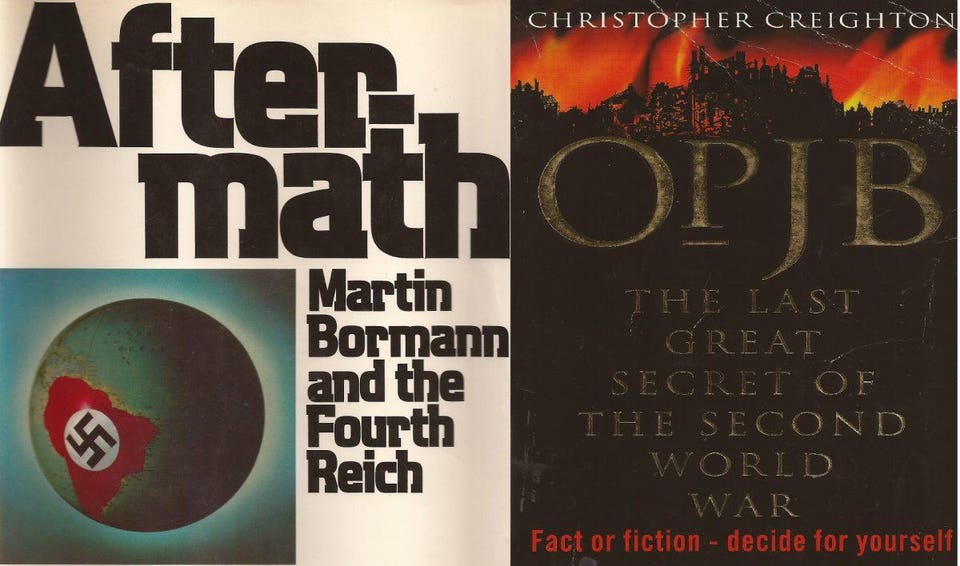 Aftermath and Op JB are just two of the books about Martin Bormann alleged escape where facts are mixed with fiction and mistakesPHOTO MONTAGE BY ALEJANDRO CHAFUEN, CROPS OF THE COVERS OF BOOKS IN HIS POSSESSION

I also wonder, and am frequently asked, why aren’t accomplices of other totalitarian massacres and more recent genocides hunted and prosecuted with the same zeal? I do not have room for a detailed answer, but it boils down to a mixture of interests, ideas and leadership. As Alan Charles Korsand other have shown, one of the reasons why the atrocities of communism have not gotten the same scrutiny than those of Nazism and fascism has to do with the ideologies being spread by statist academic environments. Some criminals and accomplices from other totalitarian regimes that are still with us might be our neighbors.

Going back to the recent film, despite several fabricated scenes and characters, Operation Finale is worth watching. It is helpful for not forgetting our past. But in truth, operations against criminals from totalitarian states will never end, they are never final. There should be a war without end against them.