In Rich and Poor: Equality and Inequality, Spanish philosopher Leonardo Polo (1926-2013) offers profound thoughts which can serve as a foundation to change the debate on inequality. Polo inspired thousands of students during his academic career, mostly at the University of Navarra, but also in other schools. His collected works fill almost 20 volumes. Think tanks and research centers studying his work have been founded in at least seven countries, and he directed more than 40 doctoral dissertations.

Although he was much better known as a philosopher, Polo also delved into economics. Polo pays attention to some of the great influencers in this field, from John Maynard Keynes to Milton Friedman. As he did with philosophy, he also goes beyond traditional arguments and methods. He pays attention, for example, to “spatial economics” or the influence of geography in economic development. He saw Brussels, placed strategically in the productive corridors of Europe, as destined to increase its political economic power. However, he did not like the Belgian model which, according to him, rested “entirely on big business whose guarantors are, at the same time, its parasites.” 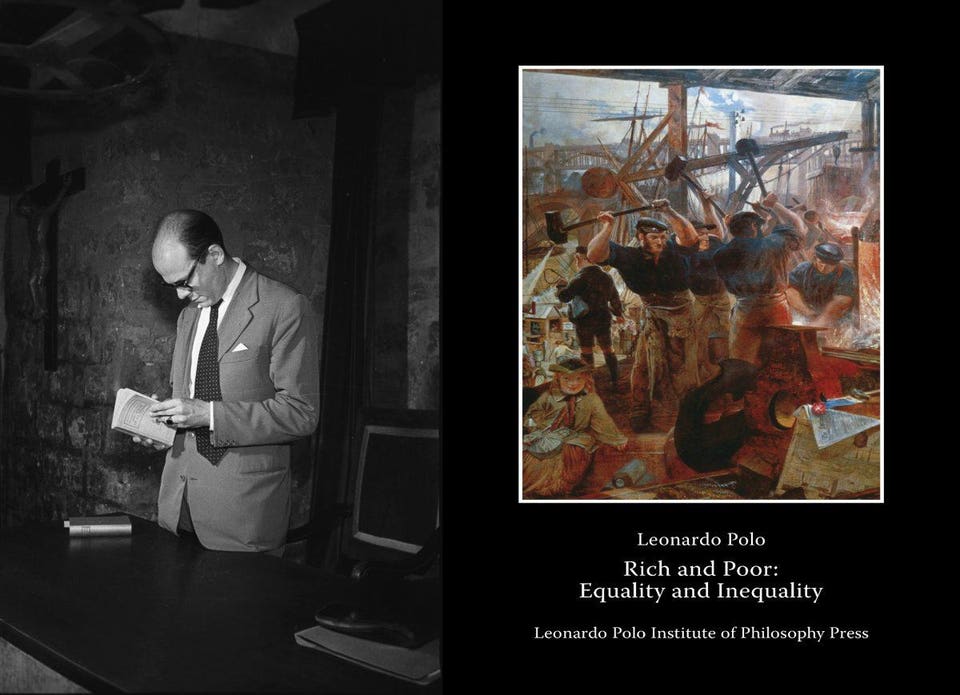 The writer who perhaps had more influence on Polo’s views on wealth is George Gilder. Labels are almost always dangerous, but Polo can be justly described as a supply-sider philosopher of economics. He called to leave most of Keynesianism behind, preferring the views of Jean Baptiste Say (1767-1832). The latter emphasized the importance of supply rather than demand, the latter being the pet peeve of Keynesians of all colors.

Polo argues that the essence of true capitalism is giving. By this it is meant the type of giving that requires taking risks without knowing if one would ever be able to recoup the investment. The true entrepreneur, and a healthy capitalism, gets corrupted by the Keynesian vision. While the true entrepreneur is someone who sees an opportunity to create, and has the talent and willingness to attract resources and invest in them before seeing a result, the Keynesian entrepreneur, according to Polo, is someone who likes to ride the coattails of higher growth, assuming little or negligent risks.

Keynes policies lead “to the rise of what we could call businessmen of convenience, not by vocation. This type of people, in which the eagerness for risk is very limited, have been the real promoters of the consumer society.” By consumer society, Polo understands a society where most actors focus on the material side of economics. These types of entrepreneurs are more interested in being “spies of the signs of demand (practice of marketing) than discovery, creation and assuming risk.”

Polo has special views on distributive justice which, unlike the typical redistributionist interpretations, are consistent with the free society. For him, “distributive justice guarantees what is usually called the common good, that is, that the interplay of human endeavors in society be good to all.” The two main forces working for this kind of justice are the family, with its functional inequality, and the risk-taking entrepreneur. Both are based on giving rather than taking, and as the work of the entrepreneur benefits people who are far from his family, it seems that it involves more immediate generosity than that of a family member.

Polo makes it clear that redistribution and subsidies rather than helping solve the problem of poverty tend to make it worse. Despite its inefficacy, Keynesians and bureaucrats seemingly love this approach. “Risk” Polo wrote, “does not attract the socialist bureaucracy either, both the Keynesian businessman as well as the social-democratic politician are incapable of promoting human dignity: they are shot through with inauthenticity, their activity is intimately unattended, he pays no heed to distributive justice.” 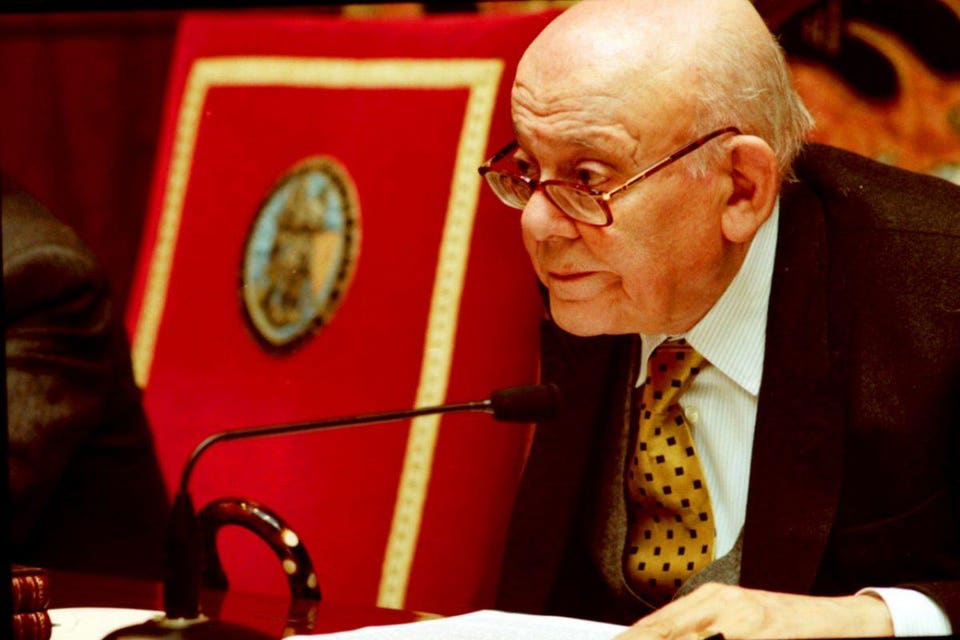 Through his academic work at the University of Navarra, Leonardo Polo influenced thousands of students and academicians around the globe MANUEL CASTELLS

The giving which is essential for a just and free society is not only material, it is also spiritual and must derive from what is ours rather than from what belongs to the common pool. Polo adds: “[S]trictly speaking, distributive justice compels one to be daring: in the case of the businessman, to not wait until one has a guaranteed buyer before producing, to trust in supply.” Polo’s views are different from the traditional classic Aristotelian and Thomistic view of distributive justice: that which deals with the rules needed for maintaining and distributing what is held in common (public buildings, the proceeds from taxes, government appointments, etc.), but they do not contradict it. Polo is aware that commutative justice (justice in contracts), despite its importance, does not guarantee a free and just society. Contracts also need to be complemented by distributive justice. The rules that determine distributive justice, however, are even more difficult to discern.

Polo’s views about distributive justice are more in line with neglected notions of social justice, which regard redistribution as a problem but consider it a virtue to work for the common good. An entrepreneur who risks advancing supply could be looked upon as favorably as a philanthropist – if not more so. This kind of social and distributive justice is essential, but is beyond courtroom justice. No one can be taken to court for being unwilling to assume risks.

Polo’s theories would benefit from a greater emphasis on the role of free prices to help guide entrepreneurs so that “endeavors in society be good to all” or at least to most. That was a key insight in the teachings of Nobel laureate F. A. Hayek and also of Ludwig von Mises. Polo does not quote Von Mises but reaches similar conclusions when he writes that “accumulating capital is an activity of a spiritual nature.” In Human Action, his most important treatise, Von Mises wrote: «The ‘productive forces’ are not material. Production is a spiritual, intellectual, and ideological phenomenon. It is the method that man, directed by reason, employs for the best possible removal of uneasiness. What distinguishes our conditions from those of our ancestors who lived one thousand or twenty thousand years ago is not something material, but something spiritual. The material changes are the outcome of the spiritual changes.»

Polo is a strong critic of the current views that distributive justice consists of taking from the rich and subsidizing the poor. He correctly saw that the weakening of the entrepreneurial spirit leads to the weakening of the common good. He was very concerned about bureaucracy which he saw affecting not only government but also large corporations.

Adam Smith, the most famous economist of all times, sometimes labeled the “father of economics,” was a moral philosopher. His views greatly influenced economic policies since their introduction during the 18th century Scottish Enlightenment. Since then, there is a declining proportion of economists who make an effort to understand and incorporate philosophical analyses into their work. Philosophers similarly tend to avoid economic matters. Leonardo Polo is a healthy exception. He never abandoned his philosophical language, difficult and sometimes unique, but he nurtured his analyses by reading some of the best economists.

His economic philosophy can play a salutary role in providing direction to the platforms of center-right and conservative parties in Spain. It combines understanding of economics and includes profound insights about the human condition.

As Spain’s political scene is being rebuilt and given the growing interest in the work of this philosopher, Polo’s views might become more influential than ever. He was not a typical conservative, his father died in exile for siding with the opponents of Francisco Franco. His economic views are likely to be more attractive to the parties that favor the free-market, like the rejuvenated Popular Party, which, after some contention, decided to name Pablo Casado Blanco, an attractive and intelligent 37-year-old as its leader. The budding Vox party, the most conservative force but still very small, can also learn from Polo’s views. Ciudadanos the party led by Alexis Rivera, also an appealing leader, might agree more with Polo’s economics than his views on the family. Ciudadanos is still searching for the right combination of principles that will increase its national appeal.

On the left, the Partido Socialista Obrero Español (PSOE), which leads the current eclectic government coalition, could also learn, but they will have to reject part of their bourgeois socialism. Polo wrote that during the 1980s, the PSOE was rejecting Keynesianism, but still endorsing redistribution because “socialism becomes uneasy when someone has more than another.” Alberto I. Vargas, a co-founder of the U.S.-based Leonardo Polo Institute of Philosophy asserts that the PSOE could adopt some of the social and communitarian views of Polo as well as his views on workers, who, when better informed about the conditions and decisions of their companies and markets, are also creative entrepreneurs. The road to reduce poverty lies not in reducing inequality but in creating wealth by liberating and enhancing the entrepreneurial-giving spirit in both workers and investors. Vargas concludes: “Polo’s views on how to help the poor are very rich and far from paternalism, rather in the line of freedom and the power of giving.”