“We have many issues that go to a referendum in Switzerland. But after the results come in, and we know who won, the government immediately works to implement the decision. It has been three years since the Brexit vote. What is going on?”

I had the privilege of spending several days in London recently, and the above question by a friendly Swiss journalist to our host at a dinner helped confirm my views of what has been taking place in London: a concerted effort to negate the results of the June 23, 2016 election.

The dinner was a memorable moment and at a historical place: the Houses of Parliament. I was invited by a committed conservative, a member of the House of Lords who has direct knowledge of the situation, processes and players. He is also uniquely familiar with the talents and character of Prime Minister Boris Johnson. I received the invitation before anyone knew how critical the week would be. There were only four of us at the table during that hectic evening, during which our host had to leave four times during drinks and dinner to go and cast votes. His manners and demeanor made it all easy, despite the sad fact nothing is easy in contemporary British politics and business.

The acute discussions also revealed to me that there are other battles beyond Brexit. In the first interview after her resignation, former Work and Pension Minister Amber Rudd emphasized the word “moderate” several times. Whenever there is a mention of the 21 members of Parliament who were expelled for voting with the opposition to delay Brexit further, the word “moderate” never fails to appear. One side is depicted as “moderate, moderate, moderate” while those who intend to enact the will of the majority are portrayed as radical clowns who do not play by the rules.

The goal of the anti-Brexit conservatives is to undermine Boris Johnson and to take the conservative party back to a John Major-David Cameron line.

But beyond London, in the regions favorable to Brexit, it is a different world. The conservatives who do not support Boris Johnson know that they are walking a fine line. At the moment they might like being portrayed by the establishment as putting “country over party,” but they know they could soon be portrayed as putting “the European Union and London over country.”

Outside the city, and perhaps inside as well, many agree with the analysis by Theodore Dalrymple (pen name of Anthony Malcolm Daniels). According to Dalrymple, those who protest Johnson’s decision to suspend Parliament “are not trying to defend parliamentary democracy, about which they do not give a fig; what they are protesting against is that the votes of those persons whom they consider ignorant, uneducated, prejudiced, xenophobic, and so forth, have a chance of being taken seriously, indeed as seriously as their own. This is an outrage to their dignity.”

For those who live in the DC area, this attitude is not new: it is the same attitude that inspires resistance to most of the Trump agenda, made possible only by the votes of “deplorables.”

When in her first post-resignation interview Amber Rudd was asked about Boris Johnson’s views, she answered, “He also prefers to get a deal but he is not working to get a deal.” I got a different impression from hearing the lengthy committee interview of Michael Gove, Minister for the Cabinet Office, and the BBC interview of Sajid Javid, Chancellor of the Exchequer. Gove answered: “There is no good date to leave the EU with no deal,” and, “Boris Johnson is being helpful.” After each question about what could happen in specific sectors with a no-deal Brexit, Gove explained possible and plausible scenarios. He was not improvising. 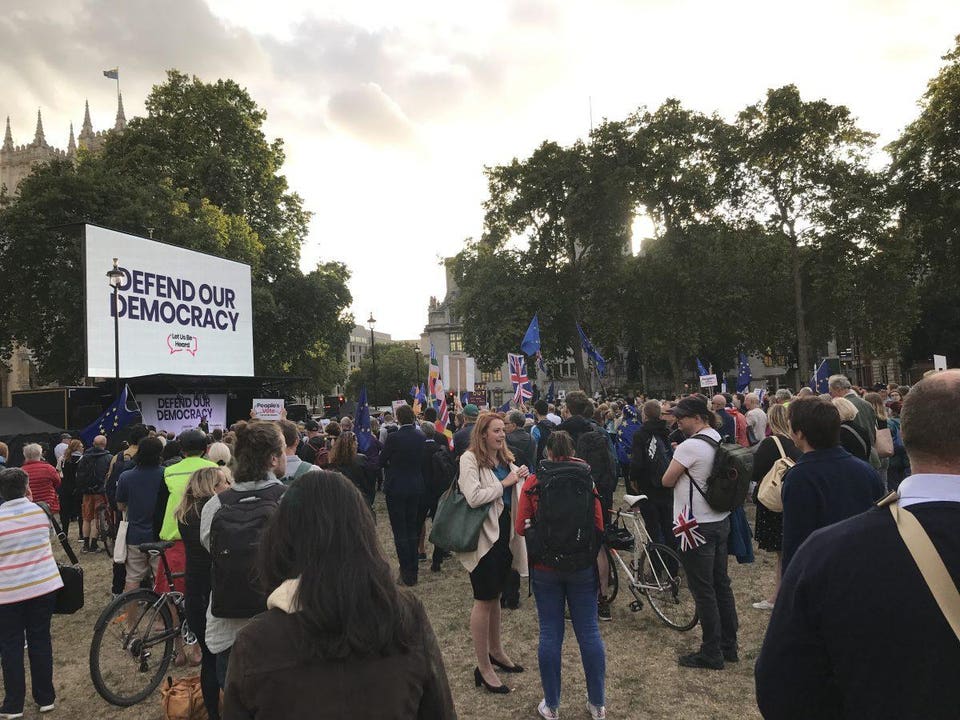 Defend Democracy gathering in front of the Parliament. But not now. Only Boris Johnson pushing for a vote

Javid argued that Brexit is the government’s central focus. But when asked for the evidence, a draft of the plans, he avoided specifics, and answered by saying that they hold two to three meetings a week. But why has no document or Brexit deal been shared? Javid answered he is aware of plans for a new Brexit deal, but he will not share them. He supported Boris Johnson’s argument that they need to be ready to play the no-deal Brexit card; otherwise the EU would have full power to impose its will or block Brexit indefinitely. By blocking a no-deal Brexit, the Remainers were actually kneecapping the Conservative government.

I recently wrote an article about the admirable economic liberalization and deregulation law passed in Brazil. I asked those who wrote it if their bureaucracies played a helpful role, and they answered that they avoided working with their own “public servants.” They did it all quietly, within their inner circle. Any advance knowledge of the details would have been used by the Brazilian Deep State and their allies to derail the plans. I get the sense that the same is happening now in the United Kingdom. The British government’s Civil Contingencies Secretariat, for instance, produced a document called Operation Yellowhammer, which it tried to keep confidential. The document details the worst-case scenarios and risk areas of a no-deal Brexit. Those who oppose Brexit are using this analysis to create fear and change some minds.

The U.K. divisions and polarization are as great as in the United States, and the talking points are set. One party argues that Parliament is disobeying the people, the other that Boris Johnson is disobeying the law. Both accuse the other side of being anti-democratic. The longer this division and impasse continues, the more business will suffer.

Helen Dale, a writer who follows British politics closely, recently wrote an article for Law and Liberty stating that “everyone involved in this tremendous national contretemps looks at the word ‘democracy’ and – depending on how they answer the Leave/Remain question – defines it differently.” But in an ominous forecast, Dale writes that the impasse could go on for a very long time. She continues: “Maybe the definition of Hell really is re-fighting the 2016 Referendum for all eternity,” and asserts, “We are trapped in a sort of Brexit limbo that – given the electorate is still divided 52:48 Leave:Remain – may not be resolved even by a general election later this year.”

A general election seems the most logical approach and the only way that the Brexit vote will be respected. All serious analysis, the political road signs, and recent actions by Boris Johnson point to a national election. As the polls are currently in his favor, his opponents are trying to delay elections as long as possible, hoping the political winds start blowing against Johnson. Each party, nevertheless, is positioning its forces and frame its narrative for what they know is an inevitable national election. The Liberal Democrats, for example, have vowed to abolish Brexit altogether. 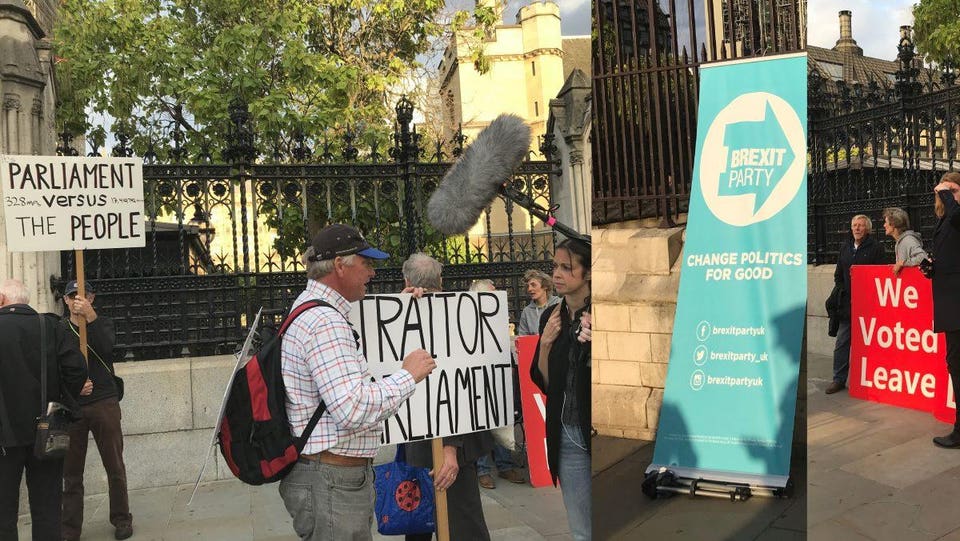 If Parliament does not call for a new election (they need two-thirds of the vote), then Boris Johnson will face three choices: challenging the law passed by Parliament, obeying that law, or handing his resignation to the Queen, who would then have to call for a new government. Jeremy Corbyn is the next in the order of succession, and a Corbyn government would likely not last long. His anti-market, pro-socialist views would be much more damaging for U.K. business than a no-deal Brexit. There will likely be a call for another election before the end of the year. The anti-Johnson and anti-Brexit conservatives will hope to position one of their own “moderates” as an alternative: one possibility is Kenneth Clark, who was one of the 21 expelled and was the longest-serving member of Parliament.

Additional factors in what looks like a road to a general election are the role of Nigel Farage and his Brexit party, and the views and role of Boris Johnson’s chief adviser, Dominic Cummings. Boris Johnson now seems to have stolen the thunder from Nigel Farage and his support for a clean-cut Brexit. Many on Johnson’s team believe Farage offered a pact to the conservatives in which he will work to deliver the rural votes from Northern England in exchange for Tories maintaining their support for Brexit. In a recent interview, Farage cast some doubts on Boris Johnson’s commitment to a no-deal Brexit. Given that Boris Johnson has lost six straight votes in Parliament and that he is 30 seats short of a majority, Farage believes that a new election before the end of the year is inevitable.

Dominic Cummings’s role has led to many discussions and conspiracy theories. From 2007 to 2014, Cummings was special adviser to then-Education Secretary Michael Gove. Cummings is often compared to Steve Bannon, who occupied a similar position under President Donald Trump. Cummings played a key role in the Vote Leave victory in 2016. Bannon helped Trump achieve his 2016 victory. Bannon is now out, having achieved part of his goals, and is now engaged in another leave campaign: “Leave behind the tyranny of the Deep State.” Those who know Cummings think he will be happy just to achieve Brexit and then move to his next crusade. Cummings, like Bannon, wants to strike a blow against the Deep State, or its U.K. distinguished name, “civil servants.”

The division of power in the U.K. points to a scenario with continued uncertainty, which will affect business decisions until Brexit is complete. If Brexit is blocked, the many who feel disenfranchised will in future elections increase their support for Nigel Farage and his Brexit party.

In a recent piece on Forbes.com, Clem Chambers opined, “The U.K. stock market is increasingly telling us Brexit is dead.” I do not look at short-term market moves for forecasting. In the month after the Brexit vote, the Financial Times Stock Exchange went up almost 10 percent, from 6139 to 6730, and it now stands close to 7300. Although I do not buy the argument that stocks are pointing to a dead Brexit, I do believe that the establishment in London feels they are on the winning side. But theirs might be a Pyrrhic victory, since disrespecting the Brexit vote would very likely lead to a left-wing Jeremy Corbyn government and then, after some political wrangling, a more populist right-wing government. Either way, the increased uncertainty will continue to be a drag on U.K. business. Each side will have plenty of ammunition for blaming the other.

The journalist I mentioned at the beginning indicated that all Swiss civil servants work to implement the results immediately after a referendum. In Great Britain, on the other hand, it has been more than three years since the Brexit vote, and most U.K. civil servants seem to have proved that their goal is to resist it. Helen Dale’s use of the terms limbo and hell to refer to the Brexit impasse seems appropriate. As I write these words, we are waiting for the Courts to decide if the Scottish Courts were right when they judged it illegal for Boris Johnson to close Parliament temporarily. Yesterday, in what seemed an ambush against him, Boris Johnson decided to pull out of the final press conference when he saw that the podiums were moved outside, near a crowd of hecklers. For many, it all makes for a unique and entertaining political spectacle, but for those who do business in the United Kingdom, it is also a source of prolonged uncertainty.