Over the course of the last five years, I have been devoting my Christmas article to authors or topics that touch upon the birth of Jesus of Nazareth and are relevant to the free society and a free economy. This Christmas, I focus on John Locke (1632-1704), one of the most celebrated champions of human liberty. 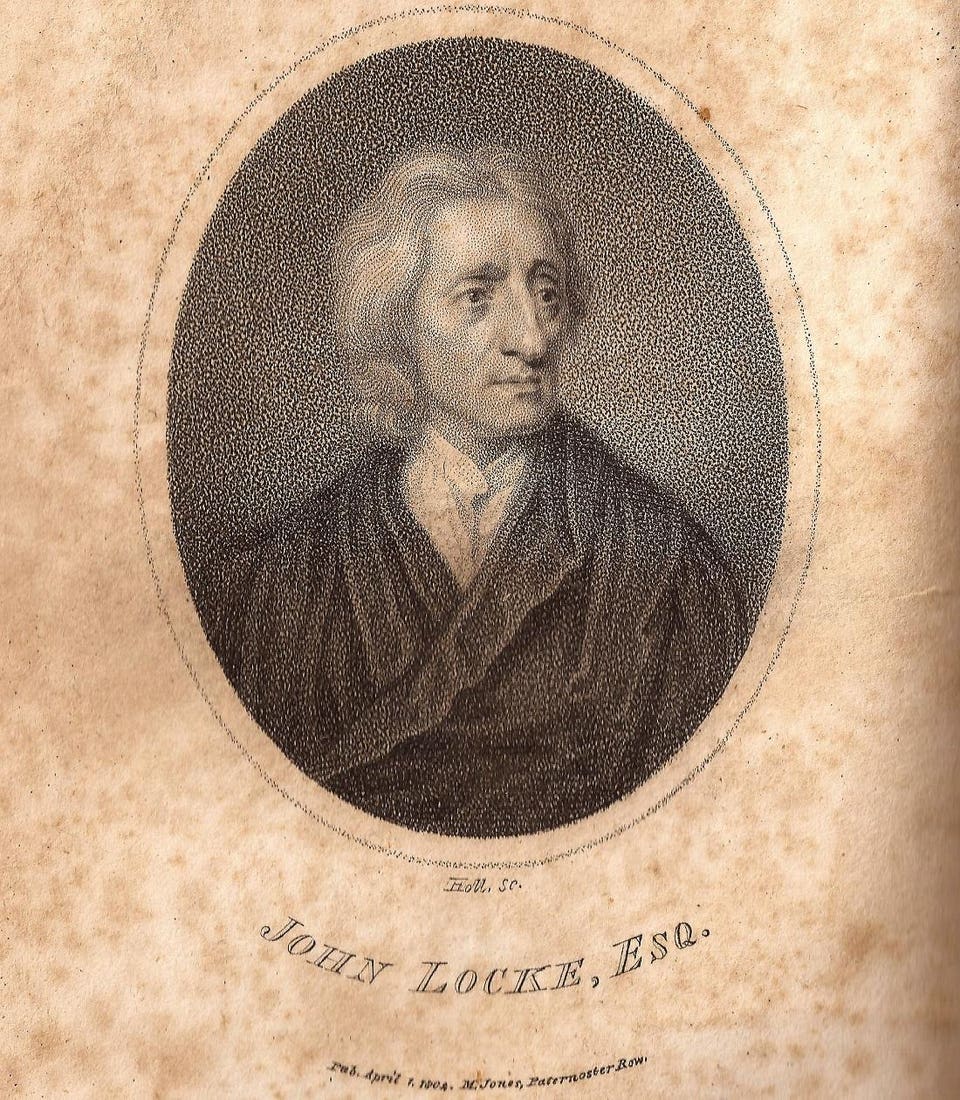 George Santayana (1863-1952), the noted philosopher, started a lecture by saying that a good portrait of Locke “should be painted in the manner of the Dutch masters, in a sunny interior, scrupulously furnished with all the implements of domestic comforts and philosophical enquiry: the Holy Bible open majestically before him, and beside it that other revelation—the terrestrial globe.” Victor Nuovo, who edited a book of most of Locke’s writings on religion, wrote that “no other philosopher except Aristotle has had such an impact on the common mind.” Nuovo concluded that a “careful reading of his theological writings shows that he viewed the world in terms of biblical sacred history that began with the angelic rebellion and would end with the Last Judgement.”

John Locke spent his life trying to understand the human person and spent several decades, especially the last one of his life, trying to better understand Christianity. He did not just study religion; he also lived it. When he was no longer able to go to church, he thought it proper to receive the sacrament at home. His biographers state that he spent his time in “acts of piety and devotion,” exhorting those at his bedside that this life should only be regarded as a preparation for a better one.

One of these biographers, Howard R. Penniman (1916-1995), wrote that Locke’s book The Reasonableness of Christianity (1695) and still more his Paraphrase and Notes on the Epistles of St. Paul(1705-1707) “were among the earliest examples of modern Biblical criticism produced by an adherent of Christianity.” J.R. Milton, a contemporary Locke scholar at King’s College, London, wrote that Locke’s Paraphrase “was the culmination of a lifetime’s study, not a late intellectual deviation.”

Locke considered that every well-educated young person should study the works of Hugo Grotius (1583-1645), Samuel von Pufendorf (1632-1694) and Richard Hooker (1554-1600). These were all Protestants who had read the Catholic late scholastics. Hooker was especially influenced by the writings of Thomas Aquinas. Locke also studied other works by Catholic authors such as Natural and Moral History of the Indies (1590) by Father José de Acosta (ca. 1540-1600). Some of Acosta’s views might have influenced Locke’s view on toleration, as when Acosta concluded that “there are no peoples so barbaric that they do not have something worthy of praise, nor are there any people so civilized and humane that they stand in no need of correction.” There were exceptions to Locke’s view about tolerance, however. In his view God was so important that his call for tolerance did not extend to atheists.

Maurice Cranston (1920-1993) wrote in a book on Locke that he “believed that Reason was God’s voice in every man: hence, for Locke, there could be no real conflict between reason and faith.” Locke lamented the divide between priests and philosophers: “The priests, that delivered the oracles of heaven, and pretended to speak from the gods, spoke little of virtue and a good life. And, on the other side, the philosophers, who spoke from reason, made not much mention of the Deity in their ethics. They depended on reason and her oracles, which contain nothing but truth, but yet some parts of that truth lie too deep for our natural powers easily to reach and make plain and visible to mankind without some light from above to direct them.” Among the 20th century’s political philosophers, it was F.A. Hayek (1899-1992) who cautioned most strongly about the limits of reason and the importance of tradition and religion.

Locke made an effort not only to understand those things that are more readily understood by reason, but also the supernatural. It is actually hard to read any work by Locke that does not bring up God or the Bible. In Some Thoughts Concerning Education, for example, he not only recommends that children should read the Bible but also states that it would be better for someone to write a good history of the Bible for young people. The book has a section called “On the Worship of God as the Foundation of Virtue,” where Locke recommends teaching children that virtue should be founded on “a true notion of a God, such as the creed wisely teaches, as far as his age is capable, and by accustoming him to pray to him, the next thing to be taken care of, is to keep him exactly to speaking of truth, and by all the ways imaginable inclining him to be good-natured. Let him know, that twenty faults are sooner to be forgiven, than the straining of truth to cover any one by an excuse.”

For Locke, it was clear that all of creation was given to mankind in common. But as God commanded man to subdue the earth, he gave authority to appropriate goods. He was not an anarchist either. To encourage stewardship, “God hath certainly appointed government to restrain the partiality and violence of men.” He also went beyond individualism, as he recognized the existence of the soul and the social nature and needs of human beings: “Every man has an immortal soul, capable of eternal happiness or misery; whose happiness depending upon his believing and doing those things in this life which are necessary to the obtaining of God’s favor, and are prescribed by God to that end.” Elsewhere he added, “There is nothing in this world that is of any consideration in comparison with eternity,” which explains why he devoted so much time to studying religion.

His views on the birth of Jesus were in line with the scriptures. In The Reasonableness of Christianity, Locke touches upon the Christmas story on several occasions. He accepts the narrative of the Gospel: “God nevertheless, out of his infinite mercy, willing to bestow eternal life on mortal men, sends Jesus Christ into the world; who being conceived in the womb of a virgin (that had not known man) by the immediate power of God, was properly the Son of God…. Being the Son of God, he was like the Father, immortal.” He saw Jesus as the Messiah and described the role of Christians as an evangelical one, going through the towns preaching the gospel, the “good news.” 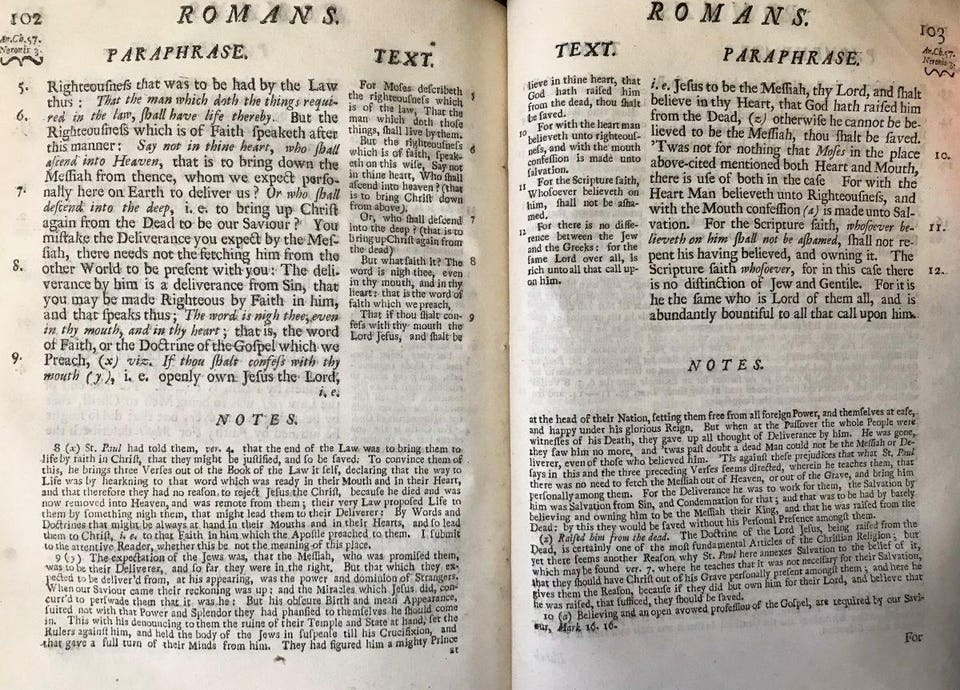 Locke discusses the birth of Jesus in his Paraphrase and Notes on the Epistles of St. Paul (1705-1707)ALEJANDRO CHAFUEN

In Paraphrase and Notes on the Epistles of St. Paul, Locke describes the bewilderment of some of the Jews, who were expecting to be delivered from the power and dominion of strangers. Locke explains, “When our Savior came their reckoning was up; and the Miracles which Jesus did, concurred to persuade them that it was he. But his obscure Birth and mean Appearance, suited not with that Power and Splendor they had phansied to themselves he should come in.”

Locke’s views on religion were the foundation of his views on the human person. Although without question many authors have come to similar conclusions as Locke without having his same theological and religious interests, most of them developed their ideas and understanding in a world made possible by Locke’s contributions. There are many mysteries in Christianity and the Christmas story. The respect shown to them by a champion of logic and reason such as John Locke can help some of us to an even greater enjoyment of these holy celebrations.