A few months ago I described in this column many of the academic and think tank efforts which were inspired by F. A. Hayek (1899-1992). I also mentioned that Hayek played a major role in the freedom movement thanks to his effort to create the Mont Pelerin Society (MPS) in 1947. The society is meeting these days in Seoul, South Korea, which coincides with the date of Hayek’s birthday (May 8) so it is a good occasion to recall some of his forgotten or neglected views.

Several of the think tanks that have been more influenced by Hayek’s views are in Central and Eastern Europe where part of the intellectual and policy debate is reminiscent to what was taking place in the 1940s. On one side we have the globalization champions who see themselves as the champions of reason. On the other we have political forces which try to defend their local national customs, including their religious traditions. In several cases, especially in Hungary and Poland, the reactions of the traditionalists have led to the rise of new kinds of populism. What led to the reaction of the electorate in these and other countries?

At the first MPS meeting, 70 years ago, Hayek warned about an “intolerant and fierce rationalism which in particular is responsible for the gulf which particularly on the [European] Continent has for several generations driven most religious people from the liberal movement and into truly reactionary camps in which they felt little at home. I am convinced that unless this breach between true liberal and religious convictions can be heeled there is no hope for a revival of liberal forces.»

Might Hayek’s views that true liberals and religious people need to seek understanding and work together be a way to block the surge and consolidation in power of “truly reactionary camps?”

Hayek was a great admirer of Alexis De Tocqueville (1805-1859). So much so that the name he wanted for what became the MPS was the Acton-Tocqueville society. When that name was blocked by one sector of his liberal friends, they ended up choosing the name of the mount where the Hotel Du Parc, the conference hotel, was located. Hayek’s view about the need to find common ground between lovers of freedom and religion are reminiscent of Tocqueville who wrote: “What most and always amazes me about my country [France], more especially these last few years, is to see … on the one side men who value morality, religion and order, and upon the other those who love liberty and the equality of men before the law.” He continued writing, «It seems to me, therefore, that one of the finest enterprises of our time would be to demonstrate that these things are not incompatible; that, on the contrary, they are bound together in such a fashion that each of them is weakened by separation from the rest. Such is my basic idea.»

During his career, F.A. Hayek, kept returning to this topic. His understanding that there are truths that we acquire about human liberty from sources other than reason made him respectful of religious traditions. His acceptance speech at the Nobel Prize ceremony was entitled “The Pretense of Knowledge.” It was aimed at cautioning central planners, policy experts and fellow economists, to warn them about the dangers of large scale social engineering. All libertarians, or continental liberals, tend to agree on this point, but many tend to forget the “other” Hayek, who spoke about the knowledge that is acquired through tradition, religion, and other “non-rational” means.

Then as today the promoters of human freedom were divided in matters of faith and liberty. That division has been costly. F.A. Hayek, wrote about the dangers of separating them, «It is, I think, important that we fully realize that the popular liberal creed, more on the Continent and in America than in England, contained many elements which on the one hand led many of its adherents directly into the folds of socialism or nationalism and on the other hand antagonized many who shared the basic values of individual freedom but who were repelled by the aggressive rationalism which would recognize no values except those whose utility  (for an ultimate purpose which was never disclosed) could be demonstrated by individual reason and which presumed that science was competent to tell us not only what is but also what ought to be.”

We can also find the same presumption today in some on the “progressive camp.” This camp includes people from different political leanings, left, center-right, and libertarians. They are the only ones who can define “what ought to be,” the moral rules of a politically correct world. If those with strong religious views bring their views to the political and civic scene, the “progressives” rend their garments and run to Brussels. 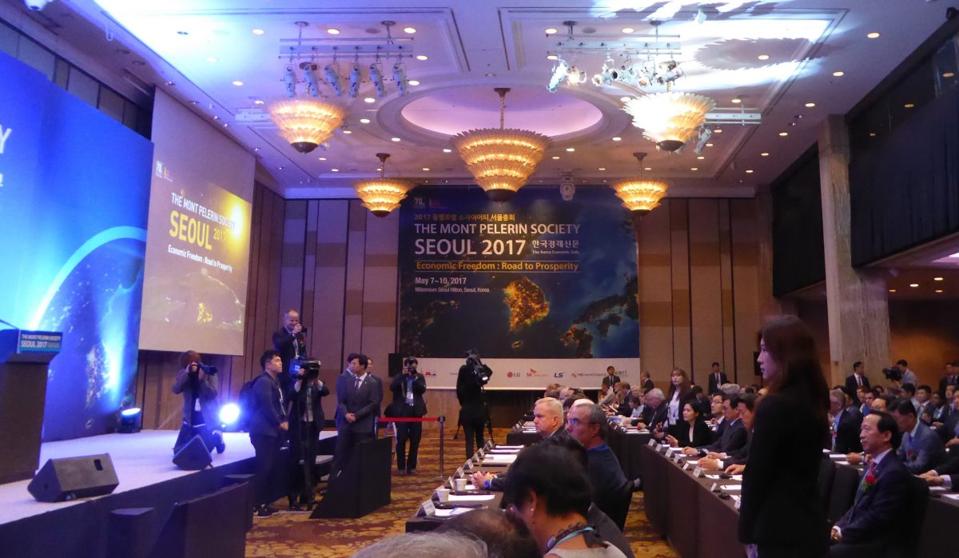 During the 1940s, Hayek saw that the problem was rooted in a “false rationalism, which gained influence in the French Revolution and which during the past hundred years has exercised its influence mainly through the twin movements of positivism and Hegelianism.” He saw these rationalist forces as “an expression of an intellectual hubris which is the opposite of that intellectual humility which is the essence of true liberalism and which treats with respect those spontaneous social forces through which the individual creates things greater than he knows. (Hayek, Proceedings of the 1947 Mont Pelerin Society Conference)

Later in 1960, in, Why I am not a Conservative, one of his most famous essays he wrote: «Unlike the rationalism of the French Revolution, true liberalism has no quarrel with religion” he deplored “the militant and essentially illiberal antireligionism [sic] which animated so much of nineteenth-century Continental liberalism. … What distinguishes the liberal from the conservative here is that, however profound his own spiritual beliefs, he will never regard himself as entitled to impose them on others and that for him the spiritual and the temporal are different spheres which ought not to be confused.»

In 1966, in a paper he presented at the Mont Pelerin Society meeting in Tokyo he again wrote about a kind of liberalism which was compatible “with religious beliefs and has often been held and even been developed by men holding strong religious beliefs” criticizing “the ‘Continental’ type of liberalism which “has always been antagonistic to all religion and politically in constant conflict with organized religions.»

Later, in 1983, during the Reagan years, he lectured at the Hoover Institution at Stanford University. The main contention of his essay was “to demonstrate that rationalism may be wrong and that traditional morals may in some respects provide a surer guide to human action than rational knowledge.” He concluded “it is not exaggeration to say that the central aim of socialism is to discredit those traditional morals which keep us alive.”

Although there have been other moments of growth, the greatest leap in civilization took place during the late eighteenth and nineteenth century. During that period, the intellectual elites of many countries began to promote institutions based on a view of the human person that was consistent with individualism and also recognized the religious, social and spiritual aspects of the human being.

I believe that human beings should try to find most answers to their more serious questions through science and reason. But there are other sources of knowledge. Understanding this and respecting those who use these other sources as guide for their civil and political life might take out some steam from the worst populist movements: “those truly reactionary camps” that were a great concern for F.A. Hayek.